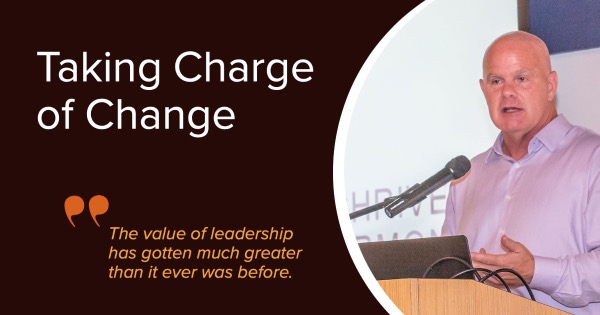 When Paul Shoemaker became the founding Executive Director of Social Venture Partners in 1998, he intended to create a way for business leaders to share their expertise with nonprofits in his hometown of Seattle. He had no plans to expand until people in other cities asked to start their own local affilliates.

Today SVP International is a global network of thousands of social innovators, entrepreneurs,
philanthropists, and business and community leaders that support social change agents in more than 40 cities and eight countries around the world.

“Anyone who’s met him knows if you’re out to change the world, he’s the guy to connect you to the people and organizations that are on that journey,” said Becky Dinnin, CEO of Social Venture Partners San Antonio.

The author, venture capitalist and former Microsoft executive shared some of the most important lessons he’s learned from his philanthropic journey with nearly 130 SVP San Antonio partners, community leaders and non-profit leaders in a luncheon presentation on Nov. 10 at the DoSeum.

After about 10 years with SVP, he found himself considering what made top philanthropic leaders so effective. The result was a framework of six questions, which formed the basis of his first book, Can’t Not Do: The Compelling Social Drive that Changes Our World, published in 2015.

“Those six questions became my way of talking about how you assess your place in the world and define a path for yourself,” he said.

The most important leadership trait of all, Shoemaker said, “is a generosity mindset, which looks for ways to connect people and is based on the belief that bringing people together makes the whole greater than the sum of its parts.”

The title came from a phrase that Shoemaker heard repeatedly from various philanthropic leaders he
had encountered that felt compelled to take action for change, discovering a cause that they couldn’t
imagine ignoring.

Identifying the qualities of the most effective leaders is an ongoing quest for Shoemaker, especially as
he sees the growing inequities in social, educational and health conditions in the country.

“Every one of those represents a really significant challenge that’s deeper and bigger than it was 20 or
even 10 years ago,” he said. “The value of leadership has gotten much greater than it ever was before.
Part of that is because we live in inequitable and complex times. Having leaders that can navigate those
issues and challenges together is so important.”

He interviewed dozens of top leaders to identify the traits that led to the biggest impact. The result is
Taking Charge of Change: How Rebuilders Solve Hard Problems, which he completed in early 2020,
before the COVID-19 pandemic.

“I found five traits that to me are most relevant to what’s going on in the world today,” he said. “All five
of those traits seem that much more important today than it did then.”

The most important of all, Shoemaker said, “is a generosity mindset, which looks for ways to connect people and is based on the belief that bringing people together makes the whole greater than the sum of its parts.”

“It’s insanely important in the world today. It’s not about being nicey nice and polite. Having a
generosity mindset is a truly strategic way you approach your work. When you walk into the room, are
you looking to see who should be connected?” he said. “That’s the glue person, the person who brings
others together. There’s less and less of a generosity mindset, less and less people who think that way,
so I think the value of it is that much greater than ever before.”