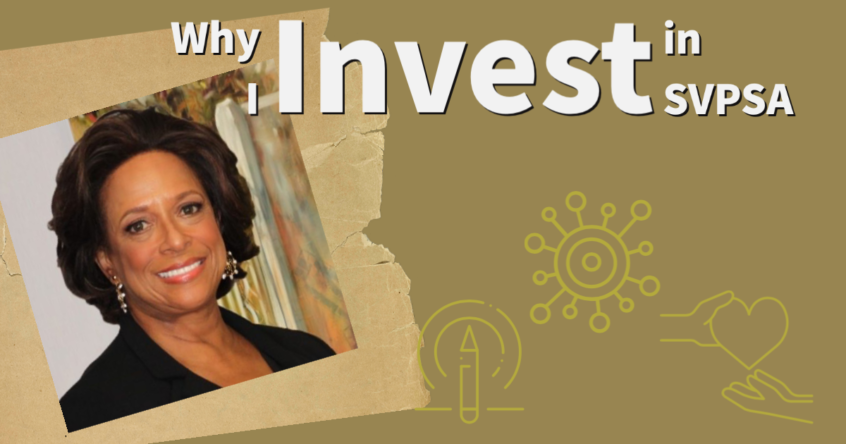 With her influence in both the business and nonprofit worlds, Priscilla Hill Ardoin, a retired officer with AT&T and longtime civic leader, has served as both a community ambassador and one of our first financial supporters of Social Venture Partners San Antonio.

After helping SVP take root in San Antonio, Hill Ardoin is encouraged by the sustainability she sees in the organization, which continued to serve the nonprofit community through the difficulties of a global pandemic.

“Priscilla is one of those individuals that cannot be replaced,” said SVPSA co-founder of SVPSA Harriet Helmle. “Her institutional knowledge of the community, both corporate and nonprofit, is extensive and valuable. She is one of the most respected and admired leaders in San Antonio and beyond.”

Hill Ardoin recalls that when she first heard of SVP, she was ready to embark on her “season of no.” After a groundbreaking 32-year career with AT&T and decades of community involvement under her belt, she was planning to pass on any new projects that came her way.

Then Helmle and John Eadie approached her with the idea of starting a local chapter of Social Venture Partners in San Antonio in 2016.

The fact that the two San Antonio icons were involved piqued her interest. She was also intrigued by the concept of a partnership between the business and the nonprofit sectors. After she read SVP founder Paul Shoemaker’s book Can’t Not Do, she was all in.

“That just put me over the top,” she said. “It resonated with me on a very deep level.”

Hill Ardoin said yes to teaming up with Eadie and Helmle to help start SVP in San Antonio in 2016.

“There were things I felt our community needed, and I thought that this was a great way of going about doing it,” she said. Hill Ardoin was instrumental in securing funds and recruiting business partners to support the new organization.

“We’ve been through some really challenging times and not only is SVP still serving its mission, but its mission is absolutely more relevant than it has ever been,” she said.

Hill Ardoin believes SVP plays a critical role in responding to current challenges. For example, as businesses struggle with a talent shortage, nonprofits face even more challenges filling positions and retaining employees. SVP’s training opportunities and connections to professional pro bono assistance are helping nonprofits develop and keep the talent they have.

“Through SVP doing what it was designed to do, we’re able to step in and mitigate some of these problems that are happening right now and fill the gap that’s created by the talent shortage we’re experiencing,” she said.

“I have lived in many communities, and the sense of giving, camaraderie, and commitment to community is just very strong in San Antonio,” she said. “I’ve not been surprised that SVP has flourished here.”

Now, after six years of service as an SVPSA partner, Hill Ardoin and her husband are moving to New Jersey to be closer to their son, daughter-in-law and 4-year-old twin grandchildren.

Helmle said, “She will be deeply missed as a valuable SVPSA Partner and as my dear friend!”

Throughout her time in San Antonio, Hill Ardoin has served in numerous community leadership roles and on boards for many nonprofits, foundations and corporations, with a special interest in causes that help families, children, underserved population and women’s issues.

She’s most passionate about the foundation she and her family created in 2005 in honor of her oldest son, Aaron, who died at age 23 of complications from sickle cell disease, a group of inherited blood disorders.

The Aaron Ardoin Foundation Supporting Sickle Cell Research and Education is a fundraising and grant-making organization that supports research and education and serves families affected by sickle cell disease. The foundation has funded initiatives including an endowed fellowship at a major research university, educational tools for pediatric patients, a crisis fund for families, and medically supervised summer camps for children.

“Resources are very limited in this area, and we have been able to make a difference in a number of really innovative ways,” she said.

As she says goodbye to San Antonio, Hill Ardoin will leave behind a legacy of service and a legion of admirers. She has no doubt that SVPSA will continue to thrive.